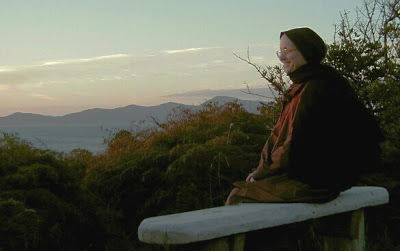 Sitting here in the stillness of a winter’s afternoon, I find myself in the middle of my life – or closer to the ending – as if suspended between two shores. I hold on to the one, the known, seemingly secure bit of earth where I landed six years ago in search of a haven – although I had the ultimate trust and refuge in the Triple Gem: nothing touches that.

To find suitable conditions for deepening my practice was as vital then as it is now, and I have been tenacious, determined to live out my remaining years on these shores. For starting again is a tiring process. And yet, I see how healthy it will be for me as I begin to let go this life – to venture out into the unknown once more. The irony is that I’m not being cast out. No one is asking me to go. I could just carry on here doing what I am doing and letting the years slide by inconsequentially.

Instead, what have I chosen? At this older, more vulnerable age, to thrust myself into the rapids of uncertainty; and to divest myself of the wrappings of a settled and viable life, in a beautiful, peaceful village surrounded by what is familiar and friendly. I really must be mad.

But I understand – and am grateful for – this madness that still flows in me; this clear sound of my own truth clamouring to be heard, offering me renewal and deliverance from habit. As much as my fear of change, so weighty are the bonds of my attachments, as well as the obstacles to my inner growth and freedom from all fear.

I have to trust, to reclaim full authority for my life so that I no longer make excuses for those who treat me shabbily. I may still choose to be silent but it won’t be out of fear that I will not be fed.

Therefore, going is imperative. I see that now. And to have chosen it myself – hazarding all because I believe there’s a truer, more connected way to live. And I have had to wake up to this, that only by stepping out from what is known and secure will I accomplish what may yet satisfy that calling.

Slowly I come to the full import of what it is to give up all that has sustained me here. I say goodbye to them one by one with thanks and a feast of gratitude, acknowledging the ways these varied friends have served and supported me. I don’t just mean the beings, but also the trees, the sea, the shells and the hills, my four legged friend next door, my books, my flocks of birds, the sounds of the wind and its songs, even the crashing waves as well as their often rhythmic whisper lulling me to sleep… I hold each of them for a moment longer, with a bitter sweetness, and I begin to let them go.

This process is a conscious dying – a vital choice for a spiritual aspirant. And I must keep exercising it for it has a power, and the giving up frees me to receive an even greater treasure.

Of course, the kindness and support offered by spiritual friends creates a bridge for the crossing. Without their unflagging faith in me, would I have the courage to do this?

As I step forward to take my leave, I feel at ease, hastening towards ‘true north’ – my home; there is no other choice than this.

← Stepping Back Into the River
The Mantra of ‘Good Enough’ →