Taming of the Shrewd 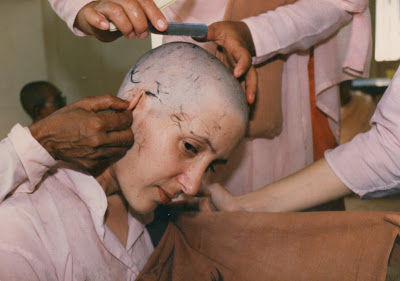 My personal identity was dismantled on the day I donned the robes of a Buddhist nun in Rangoon. After months of intensive meditation, I prayed at the Thursday Shrine of the Shwedagon Pagoda, being born on that day, to ordain as a nun. Within three weeks, I was accepted, my robes were quickly sewn, and the nuns gathered to chant while one of their elders scraped away the remnants of my hair with a cutthroat razor. 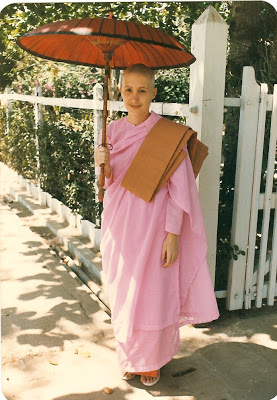 Appearing before Sayadaw U Pandita in my pink robes, I glowed with readiness to complete the precept ceremony and receive my new Pali name. It would begin with a letter that matched the day and time of my birth according to the ancient system. And Sayadaw, knowing my strengths, weaknesses and potential, would have chosen a name to reflect a quality of mind worthy of my spiritual aspirations.

Sitting tensely on the teak floor that full moon day, the whirring fan blades punctuated my anticipation. When I heard my new name, I blenched. Sayadaw looked surprised. “What’s the matter, you don’t like your name?” he asked. Chastened, I expressed my gratitude. But he had clearly read my heart. That name did not resonate at all with me.

The next evening, at the end of Sayadaw’s discourse, he summoned me. I approached his dais, still awkward in my new robes and anxious at being singled out. “I want to change your name”, Sayadaw announced. I was stunned. This was an added blessing for me – and I liked the new name instantly. It meant, he explained, the bliss of discerning wisdom. This was what I was to live up to.

When I returned to the West to live in monastic community, the moral code under which I trained governed the most refined details of our life, even the way monks and nuns addressed each other. Regardless of our personal feelings, we always used a title of respect for elders, such as ‘Venerable’ or ‘Sister’ followed by the ordained name. This applied even to those younger in the robe during communal meetings, formal events and in public.

After ten years in the robe, the monks were called ‘Ajahn’, meaning ‘teacher’. Eventually, the nuns were also given this honorific. Although only a title, still it indicated a certain standing, of one qualified to teach, lead and train younger monastics, and the respect due a teacher. ‘Ajahns’ receive special considerations, but at the same time, they shouldered greater responsibility in running the community and caring for its members.

As the ten year mark approached, I worried about falling victim to self-importance and conceit in the use of such an august title. As it happened, in my tenth year, I travelled to New Zealand for an extended sabbatical and lived there as a solitary nun. Rather than ‘Ajahn’, I chose ‘Ma’, the Burmese way of address, and later, the more eclectic ‘Amma’ as I was known in Asia.

With this, I whetted the blade for my own suffering. While everyone happily addressed me as ‘Ma’, they reserved a special respect for ‘Ajahns’ and these all happened to be monks – that rankled. Wanting due recognition as one who was just as able to transmit the Dharma, I felt diminished and so became a casualty of my own making. Even when I settled on ‘Ayya’, the name used at the time of the Buddha, nothing changed.

In the end, no name can confer authority or self-respect, nor does opinion, tradition or entitlement bestow them. As the Buddha tells us, “One does not become a noble one by birth… It is by one’s deeds that one attains to nobility.”

The riches of my being come from what I know myself to be – spiritual friend, spiritual mother, daughter of the Buddha, devotee and supplicant of the Way. My true name is the pure presence behind every name, the emptiness in which all personal identity dissolves. And where only love abides.

← Composting the Heart
I Gave Up the Froth →