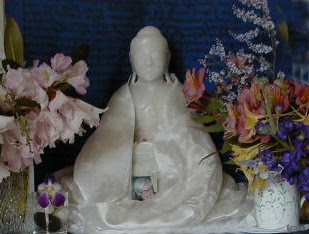 As a nun, I practice Lent every day – not just because I fast after midday but because my fast is a devotion. I choose this path out of love for a truth that reveals the depths of my humanity even in the humdrum of daily life. But this only happens when I surrender my personal desires for that love. And my Rule is the primary yardstick of that renunciation.

Theravada monastics have fasted since the Buddha lived and taught in ancient India twenty-five centuries ago. Many people question me about the value of ascetic practices that seem not only out of step, but also self-obsessed, pointless, and impractical.

Living outside the safety net of an established community, I too have pondered the merit of subjecting myself to a stress that is relentless and enervating. Years of fasting make it no easier to bear hunger – just as scaling a mountain is hardest at the top – because our resources are spent.

But this is exactly the sacrifice that defines religious vocation. It is not a punishment nor is it renunciation for its own sake. Like the kiln that fires the clay pot to strengthen it, by this sacrifice we are made tough – we are purified. While undertaking a discipline such as a period of Lent, silent retreat, abstaining from meat or giving up luxuries, we are called to examine our habitual lifestyles and the ways in which we uphold – or compromise – core values.

Recently, in the solitude of my hermitage, I took a vow of silence during the traditional three-month ‘Rains’ retreat. Faithful to my Rule, I routinely waited to ‘break fast’ after sunrise with food items that had already been offered: dry cereal, bread or fruit. For the main meal, on most days, one of my supporters would drive the long distance from town to bring cooked food and other provisions I might need, sometimes even fresh flowers and candles for my shrine.

When the weather was fierce, I worried for their safety. But as the hour grew late, my anxiety would turn inward – would they arrive to offer the meal in time for me to eat? Then I would hear the telltale sound of a car door slamming shut, and breathe more easily. On those days when no one was available to bring a meal, I ate more of the dried offerings of that morning. Whatever happened, I was determined to be content.

One Sunday morning, after two days of fasting, the promise of a meal heartened me. I paced back and forth in front of the window, waiting for the familiar sounds of a car and footsteps on the porch. With little time left before noon and no one in sight, I rummaged hurriedly through the remaining breakfast offerings to assuage my hunger.

I tried to console myself but an overwhelming sense of fragility gnawed at this veneer of composure. By mid-afternoon, my confidence collapsed. Reflecting on the immensity of my commitment, I felt unequal to it. I pined for rescue from the hunger to come, from this seeming poverty, abandonment and vulnerability.

In the dim light of winter’s evening, I sat before the ever-smiling marble Buddha, my robe wet with tears, my faith in tatters. I was anything but fearless. A single flame illuminated the Buddha’s face while I demanded to know: How will I find the strength to keep going? Where is the faith that held me through long years of spiritual travail?

Steeling myself, I recalled my lifetime vows. A strength of resolved surged in my heart. I silently declared myself a daughter of the Buddha, resolving anew that I would never forsake my vows to live the holy life. I would endure hunger, discomfort, danger – any obstacle – to continue walking in his footsteps.

These vows are not for bargaining. I did not dedicate myself to this path so that the Buddha would feed and pamper me all my days – but to empty and purify my heart, to be a worthy vessel for everything that is sacred.

← The Ninth Patch
Composting the Heart →