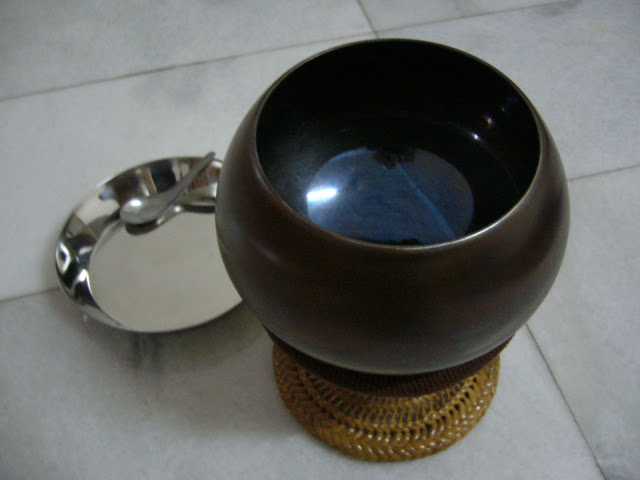 On this metal pot my life depends. It demands no ordinary faith but one that enables me to go anywhere trusting that I can survive as long as it is replenished.

This is not the first pot of my monastic career. On my ordination day, I received the traditional glazed ceramic bowl, heavy and easy to break. My relationship to it and the mindfulness I was to practise in handling it defined the spirit of early years of training. I would gain expertise not only in the rules governing its use but also – as with my other requisites – learn to take meticulous care whether setting it out at the meal, eating from it, cleaning, carrying, or storing it.

At the end of five Rains Retreats – the three Western Hemisphere summer months that determine one’s monastic age – comes that special moment. Even if the bowl is cracked or broken – the mortification being punishment enough – a nun still remains eligible to receive the more durable stainless steel one that replaces it. That will be hers to use for the remainder of her life or until she disrobes.

Naturally, I was overjoyed the day I surrendered my ceramic bowl to accept the new metal one made ready for me – wrapped in a cloth harness and perched on its bamboo stand beside my sitting mat. In the hierarchical system of our community, the bestowing of the steel bowl marks a quasi-graduation from junior to intermediate nun – by which time one is considered mature enough to begin teaching. I felt quite ‘grown up’ to be using it – as if now, at last, I had ‘arrived’.

As renunciants, we abstain from luxurious furnishings or possessions. So the shiny stainless bowl would have to be fired to discolour it. Privately, I hoped it would be burnished evenly all around, and especially that the inside turned a topaz blue.

We used a large oil drum that could serve as an oven and covered it with chunks of wood to for the bonfire. I cleaned the bowl and set it face down on a grille inside the drum. Some shards of glass were placed beneath it, their radiant heat chemically reacting with the bowl’s interior, promised that special blue finish.

By late afternoon, using soil to seal the crack between the ground and the lip of the drum, we doused our woodpile with kerosene and lit it. Once it ignited, a few monastics ceremoniously circled the bonfire with me and chanted blessings. It would burn through the night.

Still too dark in the predawn hours, I waited until after our morning meditation before slipping out to retrieve my bowl. Now copper-coloured on the outside, when I turned it over, my heart leapt to see a heavenly blue sheen.

As I carried it proudly back, the nun occupying an adjoining room – more senior in the robe and an expert at firing alms bowls – examined it. Peering inside she declared, “Very nice. Shame about the smudge.”

Once she mentioned the word ‘smudge’, I could see nothing else. All day my thoughts focused on the streak defacing the lovely new blue interior. Obsessed with how I could get rid of this odious flaw, I found it difficult to settle my mind, let alone meditate.

Eventually, I concocted a way to refire my bowl on a smaller scale – in my room. Kneeling in front of my shrine with the bowl propped on a thick wad of rags, I decanted a small amount of kerosene into it. No sooner had I dropped the match than flames shot up, forcing me to retreat.

Strange black spots soon appeared on the inside accompanied by the stench of burning fibre. A patch of carpet hidden by the rags was melting! I raced to collect water and rescue it – and my poor bowl!

Once I had tidied whatever I could of the mess, I was confronted with the damage – an unsightly carbon pelage had affixed itself to the bottom of the bowl. Applying various solvents, I managed to dissolve the burnt wool but now my new bowl was visibly – and permanently – scarred.

Disconsolate and hoping for guidance from that same nun whose remark had propelled me on this course, I confessed the whole story to her. “Too bad,” she chirped, hardly glancing up from her book, “Too attached.”

Her perspicacity stung. At that moment, no amount of reflection or remorse would assuage my sense of humiliation and foolishness. Too embarrassed to join in our communal meal, I lingered at the back of the refectory. One of the novices solicitously asked what had happened. “It’s only a smudge,” she observed.

At last, I saw how I had been needlessly thrashing in the river of my own attachments. To live contented and at peace with the way things are, I have to let go perfection. This means honouring what I am given with unconditional gratitude.

The blemish on my bowl is an enduring – and endearing – reminder not to give much credence to the opinions of others. Nor to try to fix things because I can – or think I can.

And, not to play with fire.

This a post from Ayyā Medhānandī’s blog written while based in Penang. She draws on her monastic experiences in an English monastery, as a solitary nun in a coastal New Zealand hamlet, and as an urban nun on the Malacca Straits. Other posts from this blog can be found under “Penang’s Blog” topic category.