Ayyā Anuruddhā,  of the United Kingdom, joined the Sati Sārāņīya Hermitage community in May, 2014. After her initial year as a postulant (anagārikā), she began her life as an alms mendicant nun in a sāmaņerī ordination ceremony held on September 13, 2014 with Ayyā Medhānandī as her ācarinī (teacher). 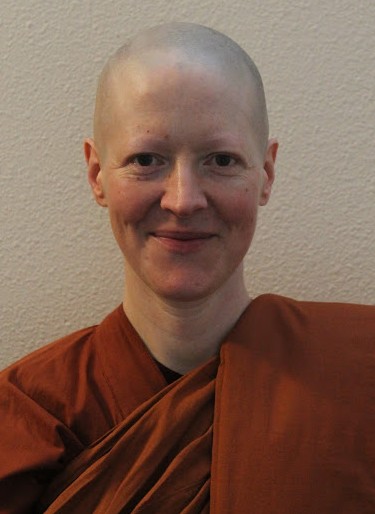 On Dec. 3, 2017, her higher ordination was conducted by a dual Sangha of bhikkhus and bhikkhunīs at Dhammadharini Monastery, in Penngrove, California, with Ayyā Tathālokā as preceptor.  That day was also the Uduvapa Poya full moon, honouring Arahant Saņghamittā Therī who established the Bhikkhunī Sangha in the 3rd century B.C. in Sri Lanka.

Anuruddha – ‘one who is in harmony’ – was the name of a beloved cousin of the Buddha, one of his chief disciples renowned for his penetrating Dhamma vision, skillfulness, devotion and noble qualities of heart.