The Dhamma of Snow 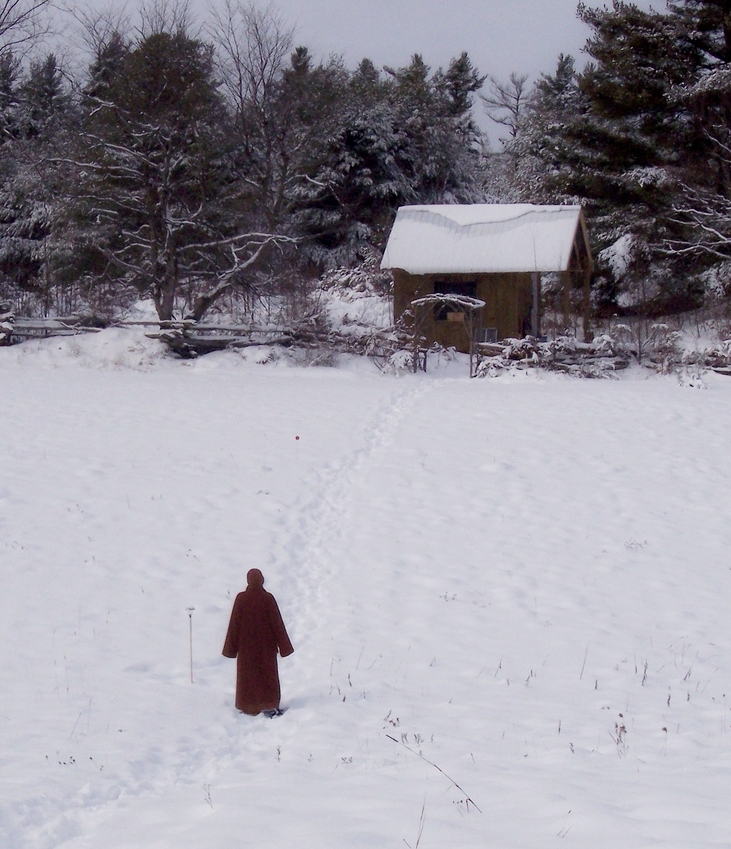 One winter we had quite a lot of snow. In April, we were still navigating from building to building through narrow pathways dug into snow several feet high. The days were quite bright and sunny, and it was remarkable to us that the snow was still there.

At the end of our winter retreat, we were moving a very heavy carpet from one building to the other which none of us could lift. We managed to get it on a sled and pulled it from the main house to the meditation hall. And then, by that very afternoon, the snow was completely gone. We couldn’t understand how that had happened, literally from morning to afternoon.

One of our nuns wrote about it to her geophysicist son. This was his reply: “You seem very impressed with how the snow melted. I’m sure it was amazing to see. The world transformed overnight.

Melting is a nonlinear process, which means melting begets melting. Also, snow requires a lot of energy to change from ice to water, and this energy does not cause any change in temperature. What this means is that the snow can actually be above freezing without melting. If all the snow gets really warm over a few nice days, then it can melt all at once, really fast. As the melted snow starts to run through the unmelted snow, it helps to speed up the process. Then, when the ground appears, it absorbs much more sunlight and the melting really speeds up. The melting has probably been going on for weeks, unseen, and then the snow layer collapsed all at once.

This sort of regime shifting happens all the time in the earth sciences. Things hold on the way they are, even in very unfavorable conditions, and then at some invisible point something snaps and everything changes. Some scientists are worried our climate may act like that, that it might all of a sudden change dramatically because of the way we are forcing it.”

His description is very fitting to our practice. The first parallel that stands out is this: “Melting is a nonlinear process.” In the same way, following the Noble Eightfold path is a nonlinear process, which means “melting begets melting,” just as waking up begets waking up. As the defilements – greed, hatred, and delusion – melt away, the process of purification speeds up our relinquishment of impurity.

The melting of the hindrances, just like the snow, requires a lot of energy to change from ice to water, to change from habit to letting go. But “this energy does not cause any change in temperature.” In other words, the energy in and of itself doesn’t cause the melting to happen completely.

That means that we can still hang onto our poor habits. We can still be stuck in our ignorance, in our delusion, in our greed and our hatred, for a long time. Even if we’ve done years and years of meditation, or weeks and weeks of retreats. Even though we’ve practiced for a long, long time, it can look like nothing has happened. That’s because the defilements can hang on for a long time, even in very unfavourable conditions. They don’t like the fact that we are working to melt them. But they hang on anyway, and we get frustrated—which they do like.

The next metaphor is this: “The snow can actually be above freezing without melting. As the melted snow starts to run through unmelted snow, it helps speed up the process.” In the same way, we use effort to sustain mindfulness and diligence, with ardor, devotion, and clear comprehension. We keep working to prevent unwholesome states from continuing. We work to remove them and to encourage wholesome states to arise, and to sustain them.

If we continue that process, and give it sustained effort, then when even a little bit of the ground of awakening begins to appear, it also has a profound effect on this process. Just like the sun-warmed ground that appears beneath the snow melt, shifting and speeding the process dramatically.

From underneath, there’s an invisible letting go of those impurities that we may not even notice. Say you have a shirt that’s very badly stained, and then you bleach it or soak it. It will get really clean. But a few stains will still show themselves, and you’ll notice those more than anything. More than all that was washed away, we notice what’s left.

So it is with this process. We’ve worked so hard. We’ve made such valiant effort. And still there are impurities that we’re shocked to find. We get discouraged and may even think we should give up. “It doesn’t work!” we think, without recollecting how much we’ve already managed to cleanse, to purify, to settle, to see. 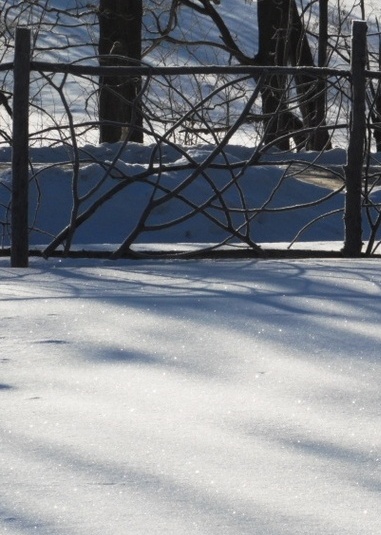 “The melting has probably been happening for weeks unseen.” Yes! Impurities have been melting and melting for months, for years, even. We may even have been doing this for lifetimes. Then suddenly, this layer of encrustation collapses. When the conditions are right and we reach a certain threshold, it falls away. A door opens, an understanding blossoms. There’s a sudden, real, penetrating insight, and a sense of realization. Something deep has been abandoned.

But there’s more work to do. “Things hold on this way even in very unfavorable conditions.” For the defilements, ethical behaviour, sīla; concentration, samādhi; and discernment, paññā, are most unfavourable. But for awakening, they’re very favourable. We have to remember to be patient, not to have expectations. Then one day we will find ourselves understanding suffering, dukkha, knowing its origins, observing it, and watching it end. Seeing it cease and letting the Noble Eightfold path rise up in front of us. Right view, right intention, right speech, right action, right livelihood, right effort, right mindfulness, right concentration.

How are we spending our time? How do we make our living? Are we doing the practice or are we just sitting? As Ajahn Chah said, “Even chickens sit.” We’ve sat this many hours today, but what kind of work have we been doing? How have we applied the mind during that time? The process itself may be nonlinear, but we must be relentless in our commitment to following the path.

The highest expression of our human nature is to purify our minds. To clear away the clouds, the sheets of snow, the ice that we’re encased in. We’re frozen in our fear, frozen in our anger, in our opinions, in our judgments of ourselves and of each other. We are locked in. We have to find the way to put the key in the lock, even in the dark.

To do this, we need to be able to feel our humanity, to feel our nature from the inside. Not superficially but from within, where the invisible factors of mindfulness, clarity, faith, energy, concentration, and wisdom can dismantle and dissolve years and years of deluded ways of perception, of relating to life. That’s what this practice brings about, given enough patience and diligence and surrendering to the process. It brings about a spiritual transformation. It’s invisible. We don’t know it right away, but after years we begin to see.

We see the changes in each other. We see the changes in ourselves. It’s quite remarkable. When you’re sitting with different states of mind arising and it seems interminable, trust that this process works. In some ways visibly, in other ways invisibly. Like the invisible melting of the snow beneath the crust of ice. It does work if we keep putting in the causes and conditions for mindfulness to arise, for diligence to arise, for contentment and gratitude to arise, for generosity to be expressed, for concentration to be matured, for wisdom to manifest. The results will take care of themselves. They know exactly when it’s time.

Trusting in the practice is key. We need to trust and persevere with determination. And that involves giving up. Nekkhamma, renunciation, is a giving up. Not just shaving your head and wearing robes. That’s not the real giving up. That’s just on the outside. As a friend of mine once said, you have to shave your heart. We shave our heads every week, but the hair grows right back. So we keep on doing it.

It’s a constant giving up. Giving up the pleasures of the senses. Wanting another hit, another kind of dessert, another kind of experience, another kind of retreat. Judging, evaluating, wanting, regretting, being angry, grieving – all of it. We constantly turn and twist through the contortions of human life until we find that place where we can see through to our true nature, and the pure mind comes into view like a bright moon.

This is a complete letting go of conditioned things, conditioned experiences, conditions in their worldly way, and giving ourselves to that which is unconditioned, until it rises up within us. We cannot find the unconditioned out in the world. We can only know it in the heart. It arises from this very body, which is death-bound, which must be washed and cleaned and tended to, and that dirties the clothing we wear. Out of this dirt-producing, odour-producing body can come an awakened mind, can come transcendent beauty.

So we use the body. We respect it and honor it for the purpose of spiritual awakening, not as a pleasure-producing entity. Our goal is not to squeeze out every last ounce of joy and pleasure from worldly things, but finally to arrive at that farther shore that we’ve been striving for. This is the meaning of the human journey for those who are willing to trust and stick to the practice.

When we allow the mind to get overexcited, overheated about things that have already happened, or about the future, we’re deepening the groove of our mental bondage. To allow anger to abide in the mind, to allow unwholesome states to pervade the mind, is like allowing Mara to sit on our backs. That won’t help collapse the kilesas, the impurities of the heart.

Everything is contained in these teachings. They’re so vast. My revered teacher Sayadaw U Pandita, the renowned Burmese meditation master, always told me, “Don’t read the books. Read your heart first.” If we study our own hearts, we’ll find that everything is written there. Everything. And if we study the suttas, we can hear the Buddha’s words and they will encourage us to keep practising.

Even when daggers have been thrust into our hearts, when we’ve experienced the most painful thing imaginable, like a mother and father losing their own child, we can still find peace through the practice. We do this by investigating the very ground of our being and discovering that there is no being in there. No solid being that we can call “me” or “mine.” Even in the face of terrible loss, we can see through the pain to the ending of pain. Not only for ourselves, but for all beings.

That’s what our journey represents: the possibility of going to the Everest of the spiritual realm. That might seem impossible from where we sit now, but we have to trust this process. And like the sudden vanishing of the winter snow, it’s nothing short of magnificent.