Mid-morning of a quiet Friday and time for my meal of the day. Weary from the tropical heat, I settled at a table outside a spread of hawker stands in the abbreviated shade of a cheerful scruffy over-sized umbrella. While my devotee went off to order our favourite spicy noodles, I waited. Clattering against blackened woks, a staccato of spatulas punctuated the bustle of bikes, pedestrians, vendors, and pigeons and dogs vying for scraps. 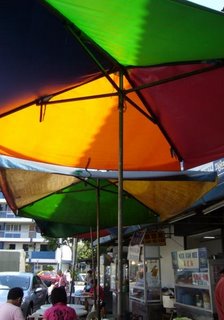 Out of this collage of vibrant aromas and colours, a tall man with a halting gait stopped at my table. Oblivious to the fact that I could not understand him, he muttered supplicatingly in the Hokkien dialect as he shoved bits of paper in my direction. I assumed he was selling lottery tickets and shook my head. It was not uncommon for petty traders to flog their merchandise and coupons to hungry locals downing bowls of noodles and drafts of coffee. Though I showed no interest, he kept up his monologue.

Just then my kappiya* reappeared. Before she could sit down, he pressed the handful of pink and yellow slips towards her, urging his cause. I felt irritated by the intrusion but she took time to look them over. It seemed he was a beggar, not a pedlar. Clasped in a single paper clip were his admission card, prescriptions and medical bills from the general hospital. Unhesitatingly, she pulled out a five dollar note and handed it to him.

Astonished by her willingness to believe and a gnawing contrition percolating through me, I watched him pick his way between the stalls and tables, displaying his bundle of papers to everyone he solicited. For the most part, he was ignored. As he shuffled up to two matrons seated nearby, they waved him away dismissively. This seemed evidence enough for me to question my kappiya why she thought his cause to be genuine. “Better to err on the side of kindness,” she told me. “If he is too poor to pay his hospital bills, who will help him? I’d rather err on the side of trust.”

Her spontaneous charity both shattered my doubt and exposed my complacency. So many poor are forced to beg. Better to err on the side of helping in case there is real need. Why had I not considered this? Having seen enough sham monks and nuns – one with a rich head of hair deftly braided out of sight, trousers and trainers concealed under her ‘robe’, and collecting money in her makeshift temple-gong ‘alms bowl’ – already primed me to treat him as an imposter. Yet there was an artless frailty in his walk, a cheap bag weighing down one shoulder, a haunted look. He plied the street in subdued, almost mechanical, fashion. What if it was not an act?

My devotee’s gracious outreach more authentically mirrored the noble compassion I espouse than my bout of cynicism. How could I presume to know who was worthy and who was not? Secure and lacking nothing, face to face with human misery and helplessness – myself a beggar – I had dangerously missed that greater dimension of faith that could embrace, rather than ignore, another human being’s need.

Chanting over our simple fare of noodles, I blessed her pure spirit and our sick friend, grateful to be reminded what it means to really wear the robe of kindness. Even if we are able to help one another, when our hearts become inured to life and the suffering of others, we too easily stray into misjudging those who need or deserve. Whether we are certain or not, we have to be willing to take risks to err on the side of kindness.

Not half an hour after our meal, I received the complement of this teaching. Outside the entrance to an open-air vegetarian eatery, I spotted a Mahayana nun. Shod in telltale cloth monastic shoes, she scuttled inside to collect a takeaway meal and was already emerging when we nearly collided. Her expression – both focused and dour – was accentuated by the distinct traces of a moustache.

Though from a different school of Buddhism, I instinctively felt a kinship – as if seeing a younger version of myself. We even wore the same colour robes! As we met, I pressed both palms together in anjali, our traditional greeting of respect, and smiled. To my surprise, there was not a flicker of acknowledgement.

It would have been impossible for her not to realise that I too am a Buddhist nun. We are not so common a sight on the street, especially I, a foreigner, bald and wrapped in a Theravadan-style robe. That, I thought, would have elicited some form of response, however understated – a nod of the head or half a smile if not a full one – any sign of reciprocation. Respect is the universal currency of monastic etiquette. That is our training.

But then I remembered my encounter with the beggar, and my failure to give him the benefit of the doubt and empathize with his plight. Now I would have to accept that the nun, too, may have had doubts about me that prevented her from responding as a spiritual cousin. Or she was merely too preoccupied to spare even a friendly look.

The heart grows miserly through the self-concern and arrogance that alienate us from one another. Setting too much store in what we do rather than how we are, we live careless and unaware. Whenever we become inflated by the vanity of our worldly accomplishments, status and wealth, or assume an ethnic or religious superiority, we betray our own humanity and intrinsic connectedness. We fail to know what it is to give and receive tenderly, to recognise that we all walk the same path – and are equally enriched by kindness.