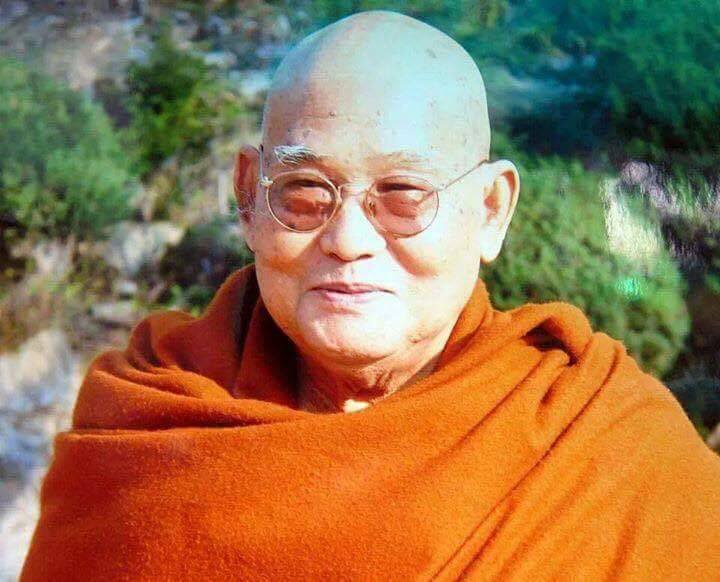 With palms on my heart, I remember and pay homage to a very rare and great being – Sayādaw U Pandita-bhivamsa of Burma – Theravāda Buddhist meditation master, teacher of teachers and practitioners and great spiritual warrior who left an indelible legacy of the Buddha’s teachings.

My preceptor and most venerable spiritual father, Dhamma benefactor and mentor for the last 30 years, Sayādaw U Pandita passed away on April 16, 2016 at the age of 94. These decades as a nun – my very name, robes, shaved head, whatever requisites I have received, my practice – all are his blessings.

Born on July 29, 1921 in Burma, Sayādaw U Pandita lived through dramatic periods of Burma-Myanmar’s history – under British colonialism, Japanese occupation, independence followed by 25 years of military dictatorship, and in 2016, reprieve in the form of a fledgling democracy led by one of his own students.

For more than 60 years of his life – even well into his 90’s – Sayādaw travelled the world, tirelessly teaching retreats and serving as spiritual advisor to retreat centers, monasteries and Buddhist organizations. He was revered as a leading authority in the theory and practice of samatha and vipassana meditation.  During his lifetime, Sayādaw’s knowledge, fearlessness, dynamic teaching skills, and wise compassion helped to inspire a modern meditation tradition of global proportions.

Sayādaw first entered the Mahābodhi Monastery at the age of seven. Even before studying meditation under the late Venerable Mahāsī Sayādaw, he had become an accomplished Buddhist scholar. He gained distinction when Mahāsī Sayādaw chose to send him with two other monks to teach Dhamma to the people of Sri Lanka during the 1950’s.

After Mahāsī Sayādaw died in 1982, Sayādaw U Pandita became his lineage heir and abbot of the Mahāsī Sāsana Yeiktha in Yangon, Myanmar. His influence rapidly spread from Burma to the Orient and the West.  In 1991, Sayādaw founded Panditarāma monastery in Yangon and became its Ovādacāriya Sayādaw (head preceptor). It now serves students internationally as one the great Theravāda meditation and study centres of the world with branches in six foreign countries.

Two of his best-known collections of Dhamma talks are In This Very Life: Liberation Teachings of the Buddha and The State of Mind Called Beautiful.

Joseph Goldstein, a founding Insight Meditation Society (IMS) teacher, shared his thoughts about the loss of Sayādaw U Pandita on LionsRoar.com: “He was such a powerful influence in all of our lives, urging us on to realize our highest aspirations. His great service to the Dhamma is inestimable. It feels like the passing of an era.”

Sharon Salzberg, also a founding teacher of IMS, shared her impressions: “We brought Sayādaw U Pandita to the Insight Meditation Society in 1984, to lead a three-month silent retreat. Joseph and I had never met him before but sat that retreat under his guidance. U Pandita Sayādaw turned out to be quite fierce and demanding. He also absolutely brought out my best effort, no holding back, and revitalized my meditation practice. I tell lots and lots of stories about things he said during that retreat. Every once in a while I think, “1984 was a long time ago!” But still they are important experiences!   The following year, 1985, I went to Burma, again for three months, to practice intensive Loving-kindness meditation under U Pandita Sayādaw’s guidance. Once again my practice was transformed, and a whole new direction for my teaching was established. I can’t even find the words to describe how important he’s been for me.”

Sayādaw gave selflessly the gifts of his boundless compassion and wisdom. He instilled us with faith in our ability to awaken. He ignited in us courageous effort, a sense of urgency, and fastidious Dhamma practice.  With reverence, joy, and gratitude, we carry these inestimable blessings forward for generations to come.