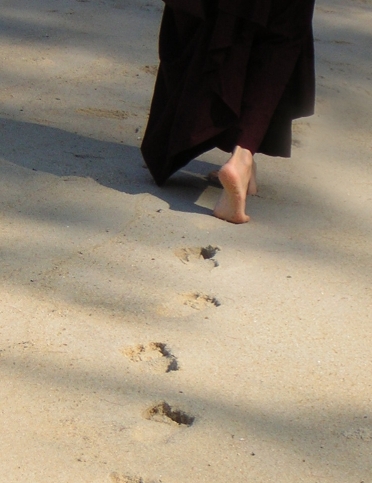 Sati Sārāņīya Hermitage is a registered religious charity and Theravāda Buddhist monastery for bhikkhunis (fully-ordained Buddhist nuns), the first of its kind in Canada. Located on 100 acres of forested lands in rural Perth, Ontario, it serves as a sanctuary for meditation and retreat in spiritual community.

It also offers a ground-breaking opportunity for qualified women candidates to train as bhikkhunis in the ‘Elders’ or Theravāda tradition, following the ancient monastic system established by the Buddha more than two and a half millenia ago.

The vision for Sati Sārāņīya Hermitage was conceived in April, 2007 during Ayyā Medhānandī’s second teaching visit to Ottawa while she was still based overseas. A group of women supporters from Buddhist communities in Ottawa and Toronto invited her to return to Canada and offered to help plant the seed for a nun’s monastery in Ontario.  By September, 2007,  Sati Sārāņīya Hermitage was registered as a Canadian charity (#847237419RR0001) and became established in the city of Ottawa in April, 2008 before moving to it’s current location near Perth in Lanark County.

The name ‘Sati Sārāņīya Hermitage’ was originally used for Ayyā Medhānandī’s ‘kuti’ (small nun’s dwelling) in New Zealand.  It emulates two vital principles for skillful living: ‘sati’ and ‘sārāņīya’.  Sati or ‘mindfulness’ means wise insight arising through present moment awareness; and ‘sārāņīya’ means harmony, friendliness, or fraternal living; also gladness.  When pronounced without the Pāli diacriticals (long a’s and long i), the root of ‘saraniya’ is ‘sarana’, refuge, and it means ‘remembering’. So, to always remember mindfulness and true Refuge!

Contemplative nuns on a life path of virtue, wisdom, and compassionate action are rare in our modern chaotic and often troubled world.  Their commitment to inner purification and peace creates an opportunity for women to undertake a life of simplicity, seclusion, moral integrity, and meditation practice. And their presence is a vital resource for spiritual resilience and social responsibility in the global community.

“Now is the time when our action is practice. . .
with a noble mind, pure and generous,
we will spread joy around us,
we will feel great peace,
and we will be able to communicate that peace
to others.”

– His Holiness The Dalai Lama