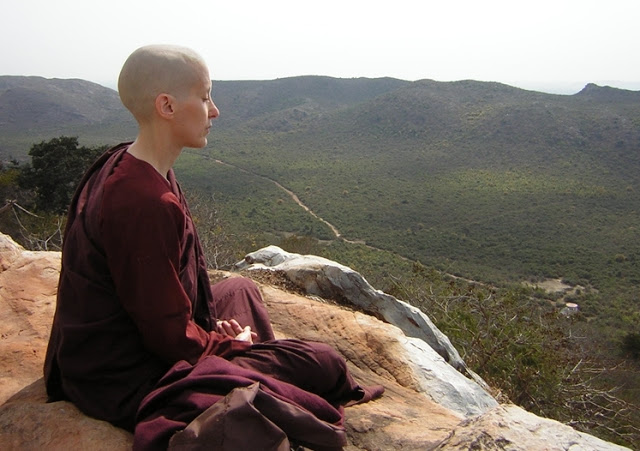 I have walked and lived in mountain ranges the world over – the Himalayas, the Andes, the Alps, the Picos de Europa, mountains in the Azores, South Asia, and North America. But not until I stayed in a condominium for a few months did I notice a visceral discomfort with heights.

Then how was I able to roam those steep summits enjoying the view? I was aware of it though I concealed my phobia well. When I needed to ground myself, I would keep my eyes on my feet or straight ahead on the path. I would also direct my gaze to the scene around me or look at the horizon to avoid the sight of sheer cliff faces or dizzying vistas.

Unwittingly, I relied on a natural tendency that is also consonant with my way of life as a Buddhist nun. I focus on my spiritual work, concentrating on where I am and what I am doing rather than on the past or future. Just as I avert my eyes from external views that might throw me off balance, distract, or unnerve me, I distance myself from troubling thoughts or feelings: a painful memory, the face of someone threatening, or a loved one whose loss still haunts.

But eventually, this turning away from – while still being aware of – what disturbs me no longer serves. It is all very well for tramping through the wilderness but on the spiritual path I have to descend to face what I fear – to see life as it is from exactly where I am.

More vital to wisdom and understanding than being cushioned by exhilarating panoramas or placated by moments of calm is an ability to see Truth and live it. To grow in stature and be able to accept what is real – no matter the terrain of feelings we have to traverse – tortuous or peaceful, rocky or smooth: this is our life’s work.

Though I have trekked over lofty passes, fear has been the most punishing mountain to scale – especially on my own as an alms mendicant. For years, to survive in a western hamlet and dependent on a scattering of locals for my daily meal, I was forced to adapt. Too frightened to mention when food I received caused digestive disorder, I compromised my health to preserve the status quo – and not jeopardize my food source. Taking my lead, why wouldn’t my supporters, too, believe all was well?

Not wanting to see, I had chosen to suppress, deny, and blind myself to what had been brewing. I had an unrealistic idea of how a nun should be: to want nothing and be content with and grateful for all that was given to me. So I clung to this flawed dynamic of seeing myself and being perceived through rose-coloured glasses.

Only by letting that go could I free myself to enter authentic relationship with my supporters. They began to regard me as a person with legitimate needs, and in doing so, honour their wish to look after me properly. And being more honest about my needs, I could take better care of myself while respecting their goodwill.

Ironically, I had fallen into this predicament by flexing the old muscle that had helped me cope so well with heights. As long as I could ignore the altitude, I would not have to feel what I was feeling – in this case, hunger and distress. But this deception, moulded by stifling compassion for myself, had only made me ill. It was a foolish and unsustainable sacrifice. And in time, I would be brought down to earth with a bump – literally.

During this same period, while on my own in a house that had been offered for my retreat, I was asked to water the plants. To reach one of them, I would have to climb on a folding chair. Without properly judging the stability of the chair or my own ability to balance, barely poised on top, water jug in hand, it collapsed. Everything came crashing down, water, jug, plant, and myself – knocked unconscious and one leg maimed.

When help arrived, I refused to see a doctor so as not to inconvenience anyone. True to form, my mantra of ‘good enough’ rolled off my tongue: “I’m fine. Everything is okay.” But I had already managed to undermine myself three times: reaching beyond my capacity – to my own detriment, discounting that same detriment, and even after it dawned on me that I had been seriously hurt, continuing as if nothing had happened!

That injury is a daily reminder of the lesson I learnt. The heights we aspire to are not measured in physical parameters nor in pretense and performance, but in the dimensions of coming down to earth and being true, exactly as we are. It is not enough only to open our eyes, we must also see clearly. Ascending too high or impatiently, unaware or blind to our limits, we can fall hard. Instead, bowing low and knowing our real strength, we truly ascend.